Anyone interested in converting their dreams into reality will love what is being created now. The Container Project is a recently formed organization for social benefit that is refitting shipping containers as expandable disaster relief modules in a box.

The first container was just created in Chicago by an inspiring group of skilled and open- hearted volunteers in record time. With their simple plan of: “No one dies, no one gets hurt, everyone has fun… get er’ done”, they managed to open both sides of a 48′ shipping container and convert it into a kitchen that can ship via, truck, rail, plane, river and sea. This impressive conversion included 2 pop-out sides that expand the container into a 25′ x 48′ commercial kitchen with the capacity to feed thousands of people per day. 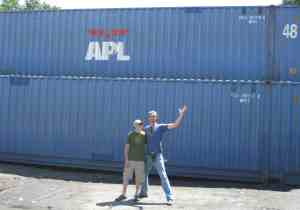 They are now busy in Reno, Nevada building out sustainable potties, showers, holding tanks and residences in time for their first test run in the harsh desert environment 3 weeks from now. The debut for these containers is to support the infrastructure for a 500 person camp at the Burningman Festival called Entheon Village for 1 week of very dry, hot and inhospitable conditions for the 50 thousand person event near Gerlach Nevada at the end of this month.

Four 48' shipping containers stacked on their short ends and locked together as a 5 story residential structure made mostly of reclaimed materials.

The next round of decommissioned containers purchased from Tom at Container Sales have been dropped near Sparks, Nevada at a great family-owned trucking company called JC’s Express. This incredible family of owner operators has made it possible for The Container Project team to do what was previously considered to be impossible. Complete a 7 container conversion in two weeks. Already the Reno community is showing their true grit and creative leadership as a community of angels, McGuyvers and Rosie the Riveters.

It is their belief that “how” one responds to circumstances is the most important factor in successfully providing assistance, especially in large scale events that affect multiple communities. Their response to current world conditions is to develop and build a clever but simple design which can be created in adverse conditions. This design uses materials which are readily available in most any country, incorporating reclaimed and recycled materials at every chance. All of their designs are open-sourced and shared freely to all communities worldwide.

As The Container Project team creates and builds this design, they are also training their group in skills needed for rapid-response. The teamwork needed to build these units becomes the very framework in which each member learns about their own abilities and helps shape the confidence and attitude of responsibility ie: the ability to respond! They aim to respond in a supportive manner which inspires the affected community to utilize its current crisis as an opportunity to grow, nurture and unite themselves, rather than fall into an attitude of victimhood or despondency.

If this project interests you and you’d like to learn more about it, or if you’d like to come train with the team, they are in Reno at this point working hard and having fun. You can call 415-572-2877

Our Future Now at Rothbury

After a few solid months of pre-production and production work, Our Future Now’s 2008 campaign has been received as a great success, engaging tens of thousands of people across the nation. Focusing most of our efforts at Rothbury Music and Arts Festival in Michigan and Mile High Music and Arts Festival in Denver, Colorado, OFN was able to redefine artistic engagement and education at these popular events.

At Rothbury, the Our Future Now team worked in numerous areas of the festivals. The backdrop of Sherwood Court Stage was designed and built by OFN artist, Shrine, who used a variety of materials that were entirely reclaimed or recycled from various refuse yards. Shrine has the incredible ability to transform something that is considered trash into a thing of true beauty. Thousands of people witnessed this stage in particular and probably had no idea that it was made out of common household trash! Highlights included the Thievery Corporations set, where thousands of people danced into the wee hours of the morning.

The Tasseograph Teahouse, another installation that Shrine had a hand in building, also graced the mainstage field. Originally built for Burning Man, the Teahouse made various appearences at numerous festivals in 2007, namely Lollapalooza, Horning’s Hideout and the String Cheese Incident‘s 4 night run at Red Rocks Amphitheater. The Tasseograph Teahouse is another testiment to the potential beauty of common trash. 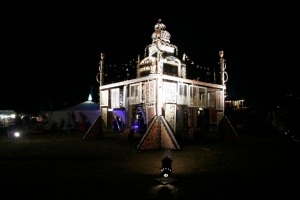 Directly behind the Tasseograph Teahouse was an installation affectionately dubbed “NOW”, a nexus that showcased creative arts and crafting. Inside NOW, participants could screenprint their own shirts, learn how to make handmade paper, get busy with a sewing machine to beautify their own clothing and also make art out of some of the cardboard OFN recycled from Rothbury.

NOW also featured our good friends the IAMU and their collection of visionary art. Thousands of participants wandered through NOW throughout the course of the festival to get their hands dirty and be artists themselves.

checking out the art at NOW

Perhaps the most talked about installation at Rothbury was the 3d Stroboscopic Zoetrope, Homouroboros. Designed and built by San Francisco artist Peter Hudson, this installation affectionately called “the monkeys” captivated the audience each time they walked through the entrance to Rothbury.

The monkeys resting by day

Surrounding the monkeys were a series of three gateways designed and built by artist Carey Thompson and Our Future Now. These Stargates were a monument that indirectly asked people to alter their perception as they walked through.

setting the Stargates in place

Other artistic highlights at Rothbury involving Our Future Now included our fiscal sponsor Conscious Alliance‘s bid to break the world record at the art of “canstruction”. Using only cans of food donated by their sponsor Whole Foods, a team of architects and artists built a 3d rendition of a hand reaching out to recieve a can of food. Conscious Alliance was indeed successful in enetering their bid into the Guinness Book of World Records!

Thousands of cans can indeed be something to behold

Many Rothbury attendees were absolutely blown away by the efforts that went into making Rothbury a new form of immersive art experience. The addition of installation art certainly makes events like this memorable in different ways besides people simply enjoying their favorite bands. From the earth scultptures in Sherwood forest to the recycled chopper in the mainstage field, there were countless opportunities to be captivated by a piece of art, making participants take another look at their environment.

You can actually ride re-"cycled" art as well

Rothbury was indeed a big chapter in the story of Our Future Now and we are extremely grateful to all the people that participated in our involvment in Rothbury. We look forward to seeing you all very soon!

Here is a great little news event from last earth day about Sustanable Waves, an OFN partner.  They have create a portable Algae generator that eats the CO2 from generators that power big festival stages. Watch the video, comment, and Matthew Atwood, one of the OFN founders who is an expert on Algae production, fuel, and more will answer you back.

Here is a great Blog entry from our partners at Black Rock Solar. We share board members, inspiration and friendships. We lent Black Rock Solar a hand filming and photographing this great project written about below…. read on to learn more…..

We’re back from the ROTHBURY festival in Rothbury, MI, and by all accounts it was a great success. Our installation at the Shelby High School got plenty of news coverage,
and our free solar power recharging station got plenty of customs. So many, in fact, that even with 50 charging slots open there were sometimes hundreds more waiting to go.

All the donations are still being tabulated, but it looks like we’ll be able to add another chunk of solar to Shelby High with a the tips and ticket upgrades we received. Photos and video will be posted as they come in, thanks to all who helped make this event happen. Here are some photos on the OurFuture Now website

Our crew has been hard at work with our local partners Bauer Power building the solar array for Shelby High School, and got some nice press for it yesterday:. The Muskegon Chronicle.

The Chicago Sun Times and Billboard Magazine both wrote an article called “Inaugural Rothbury Festival launches new regional event” The article had an excellent OFN qoute by Dr. Stephen Schneider, a Nobel Peace Prize-winning professor on Climate change and what he said was the the highlight of the festival for him; being able to connect Michael Kang, Our Future Now, co-founder with Focus the Nation and PG&E, all while watching Snoop Dog separate his trash and communicate with 10’s of thousands of kids.

It was an amazing time, being able to sit amongst a 3 stage 30,000+ person music festival in the middle of America and watch as a known musician has an intellectual and passionate conversation with a Nobel Prize winner that grows into real life, real time connections with leaders of PG&E, other professors, large scale event coordinators, Bio Fuel experts, and potential sponsors.

This was a culmination really of something I have believed in for many years and is actually practiced by Spiritual traditions around the world. That music has the power to open up both our hearts and our minds. And thus if we can combine a healthy dose of good music with some great thinkers. we may be able to make massive change both through the backstage connections and think tank conversations and through the dissemination of information to the party people themselves!

“Dr. Stephen Schneider, a Nobel Peace Price-winning professor at Stanford University who curated the Think Tank, said he, too, was ‘‘very pleased with the energy in the room’’ at the sessions and was ‘‘confident’’ that their popularity would grow in future years. The most valuable part of Rothbury, he said, was being able to network its participants — for instance, hooking up musician Michael Kang of String Cheese Incident — who operates a non-governmental organization called Our Future Now — and members of the nonprofit Focus the Nation with Pacific Gas & Electric chief Robert Park for possible sponsorship opportunities and joint ventures.”

‘It’s great to get kids in a room all hyped up about sustainability,’’ said Schneider, who, along with his academic colleagues, was busy working the backstage area during the festival. ‘‘I’d like to have larger audiences, but on the other hand we’re spreading way beyond that and putting together communities that normally wouldn’t exist if they weren’t coming together in a place like this.’’

Schneider’s favorite anecdote of the weekend: watching rapper Snoop Dogg, ‘‘him, not his staff,’’ sorting the waste from his meal into separate bins for recycling, composting and landfill trash.